RailFans don't miss their train. Why? Because they go to the station HOURS before the actual departure of their Train - to watch OTHER trains depart. - Prince Maan 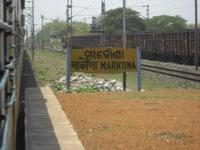